skip to main | skip to sidebar

Well, my dear friends in the world of blogger, I'm back! (da na na na na! Just gotta include that tune! ;) )
I know I've written that phrase so many times, but the truth is, I'm never really gone from blogger. I check updates, and I've started blog posts so many times but then just don't get around to finishing them. I miss this blog, as I have it mainly for selfish purposes (hey, just being honest here). It gives me great chizzuk, and whoever reads it is joining me along the beautiful journey of life.

Sinat Chinam. Oy! How terrible it is. Afterall, it is due to sinat chinam that we don't have a Beit Hamikdash.
But what on earth does sinat chinam mean? And what is the cause?
Chazal teach us that the first Beit Hamikdash was destroyed due to the three cardinal sins: shfichat damim, avoda zara, and gilui arayot. Those were terrible sins, but merely 70 years later, a 2nd Beit Hamikdash was built! Despite the gravity of our sins, we were able to merit the Beit Hamikdash that we so long for now.
That means that Am Yisrael repented & HaShem forgave and gave us another chance to be close to Him. But what was the reason that the 2nd Beit Hamikdash destroyed? Sinat Chinam. And we still don't have a 3rd Temple, so that means we STILL haven't done enough teshuva and still haven't gotten rid of sinat chinam.
Wow. I mean... is sinat chinam really so much worse than murder? Worse than avoda zara?! Worse than promiscuity??
It must be, since the Temple was built relatively quickly the second time, and we're still waiting for nearly 2000 years for the 3rd Temple to be rebuilt (may it be built b'mehera b'yameinu!)
So, it is obvious that sinat chinam is a really big deal.

But did you ever wonder what sinat chinam actually is? I remember always thinking it's hating someone without a reason, but honestly, out all everyone you know - how many people just hate someone without a reason?
I don't know many.
I do know many people who hate someone because that person hurt them in some way.
So what's the deal with sinat chinam?
The quick answer is that when we don't have hakarat hatov, we have jealousy, and jealousy leads to sinat chinam.
Ready to delve into our amazing Holy Torah?

So, let's go to the very beginning...
Adam was formed from dirt. Why dirt? Because dirt has the most potential for growth, for life, for sustenance. Afterall, everything we eat grows from dirt. Vegetation is needed for all animals to surirve. Dirt is needed for trees to grow; trees that give us oxygen, paper, wood, and countless of other benefits.
But dirt is also something very low, and well, dirty (hey, the word is called DIRTy for a reason!) That is to remind us that we are "afar" - dust. We will become dust after we die...our bodies will be nothing. That should greatly humble human beings and realize that THIS WORLD is the only place where we can use our potential, since, afterall we are made of dirt. But at the same time, we should keep in mind, that our potential is not timeless, and we will soon (hopefully after 120 BH) become dust. Then our potential will be over, and the only thing we will have left in olam haba is our mitzvot that we fulfilled in this world.
Okay, so something interesting about dust.
Think of something beautiful, like gold, silver, or black marble tiles. If they are covered in dust, they aren't so beautiful anymore. The dust conceals their beauty.
That's what happens to a person when he is jealous. His jealousy will cover up anything good that he has in his life. Jealousy blinds a person. It spreads through a person's mind like an illness and slowly but surely will completely destroy the jealous person.

What does jealousy have to do with anything?
Because jealousy is ALWAYS the cause of sinat chinam. 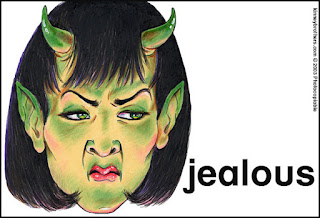 There's a Mishna that says "kina motzia et haadam m'haolam" - translated as "jealousy takes out a person from this world." What does that mean? We're still alive even if we're jealous! We're still breathing, still walking, still functioning, aren't we?
This Mishna is teaching us that the person who is jealous doesn't have a sense of self. If I don't have a sense of sense, then there is no me! I'm wrongly trying to live the other person's life if I'm jealous. My thoughts will eat me up and absolutely take away any gratitude for what G-d gave ME. So therefore, I dont have me - it's like im not in this world.

We're all individuals. Every single person in the world is special and unique - there was never anyone exactly like you in the world, and there never will be! (Yes, including you! The person reading this!)
Every person has a finger print that no one else has. So just like you don't have the same finger print as anyone else, you also shouldn't have anything else to do with anyone's bank account, looks, marriage, etc.
Every individual should focus on your himself by working on making HIMSELF happy. He shouldn't work on himself by trying to compete with other people! In fact, theres no such thing as positive competition in the Torah. Whenever people try to compete, we see disasterous results, such as w/ kayin and hevel or with korach v'adato!

There's an interesting and amusing mazal that kina (jealousy) and sina (hatred) went for a walk. They met a king, and he said to kina, I'll give you anything - whatever you ask for, and I'll give sina twice the amount of whatever you ask for. kina got annoyed and exclaimed "I don't want sina to have more than me!" So, kina thought about it & came to a decision. He requested that the king to punch out his eye, so sina would then lose both eyes.
How crazy is that?!
Anyone who reads that thinks how foolish kina was. He could've gained something, but instead he lost something just so that his enemy could suffer.
That's how terrible jealousy is. Who suffers the MOST from being jealous? The person who is jealous! He is willing to harm himself just so that the other person can lose something, so that the jealous person will feel like he has more.

So, my friends, we see here how terrible jealousy is. How much it can ruin people's lives. No wonder it's part of the 10 Commandments that it's assur for us to be jealous!
And just as much as jealousy ruins a person's life, sina can also eat a person alive - literally. To the point of murder and self-destruction.
The only way to overcome jealousy, even a speck of it, is to completely zoom out of other people's lives and to focus on the GOOD in our lives.
Once we appreciate and love OURSELVES, we can do ahavat chinam with our fellow Jews. Why love ourselves first? Because a person can only give over what he has.
If I don't love myself, how can I love someone else?

An explanation of ahavat chinam, including tips, will be'ezrat HaShem be posted in the near future.

May we all merit to work on our middot and see all of the good HaShem bestows upon us, and may we me merit to see the Beit HaMikdash rebuilt in our times b'mehera b'yameinu, amen.

***I credit most of the divrei Torah here to an excellent shiur given by Rabbi Wallerstein.